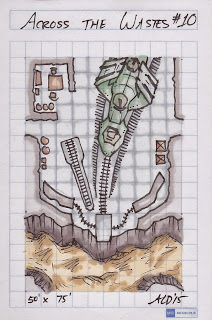 For the micromapoftheweek theme of "Lair of the Gnomish Automaton Pterasaur" (via +John Lockard and +Ray Otus ),

Millenia ago the tall mesas of the wastes were home to nests of Pterasaurs, who used the hot winds of the desert to hunt far and wide. Their calls, like screams of thunder, echoed about the columns of stone.

Years passed and the beasts died off, leaving empty nests burrowed into the tops and sides of the granite towers. Exiled clans of Gnomish raiders found the site, scaled the walls and made those caves into their new base of operation. Their engineers raised the spectre of the Pterasaurs from the dead in the form of mechanical flying vehicles that they launched from concealed bases.

Stone doors, on metal tracks, withdrew into caverns. Rails were snapped into place, extending into the air and the Automaton Pterasaur was catapulted down a slope and into the skies. Wings unfolded and the airship flew into the distance. Once missions were done, the craft returned to the top of the mesa, circled to land and was lowered by elevator to the cavern below.
Posted by Andrew C. Durston at 5:51 PM