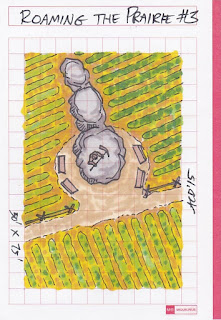 (better late than never dept.)
For our #micromapoftheweek theme of #reaper

In the north of Pembrokeshire, where the fields of the Wilmonts, Waterburys and Gentians meet, there sits a rather large outcrop of brown-gray rock. Slightly magical (at the least) it defied all attempts to remove it when the area was first settled.

Years ago some wag put a scarecrow, clad in old leather armor and holding a rusty scythe, on top of the rock. Several years later a small horde of Worgen threatened the farmers. One night the scarecrow vanished. By morning the Worgen had fled, leaving many dead scattered about their camp. A fortnight later the scarecrow reappeared, the scythe now a dark blood red.

The wise women declared this #reaper to be a protector of the area and took to leaving offerings, prayers and tithes at the base of the rock. Later a Waterbury placed benches in a semi-circle to ease the aching backs and knees of the crones. Ever since creatures or persons of evil intent have given Pembrokeshire a wide berth.
Posted by Andrew C. Durston at 8:34 PM No comments: