Part 4: #postitmap #micromap #green For my 2nd green map, I re-imagined a setting from my old Rolemaster campaign, the city of Tawen and its surrounds. 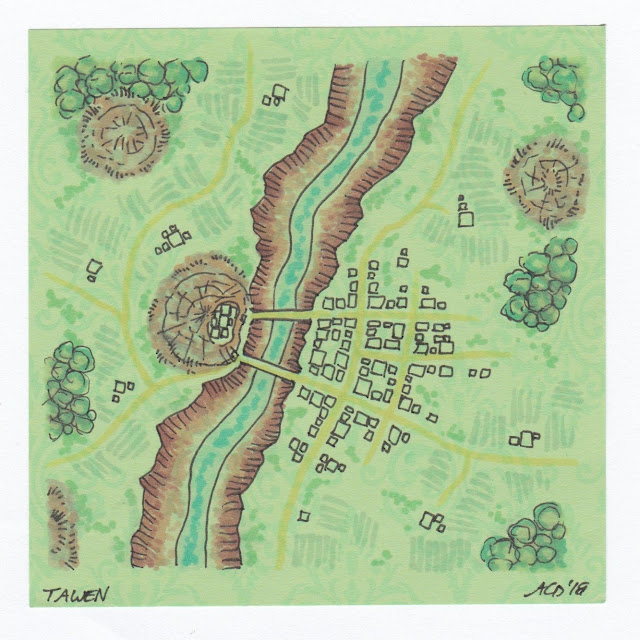 Teltelkes Heheces: Tawen
Tosca the Mouse relates, "South of Squalo, mountains rise across the southern part of the island. The source of the Qemasen is high upon their slopes. Ridges of rock extend northward from the chain. Limestone it is called. The weather of the world has gnawed away at the rock and left a field of pinnacles, like pieces upon a chessboard, arrayed along the north slopes. The Qemasen, as it grows into a large river, cuts through the slopes and winds about the vast rocks."

A great limestone pinnacle rises from the ground; the river Qemasen Stahlew (“Ravine River”) carves a path along its eastern side. Comprised of three parts, the oldest portion known as the Lower City nestles in a huge opening in the stone along the river bank. Above, in the air, the slightly younger Upper City is perched in the top of the limestone. 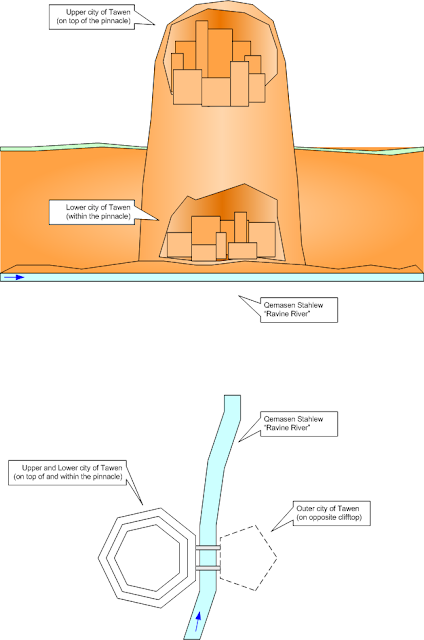 The Lower City:
The warrens of the bottom of the pinnacle are the home to the People of the Fields: Mouse – “Ketan”; Squirrel – “Toepsipaen”; Rabbit – “Sqeweo” and Rat – “Hewt.” Many craftspeople make their homes here. Docks stretch out onto the river, launching boats that make their way north to the inland lake. In darker corners, Rats run the local Thieves Guild and other unsavory businesses.

The Upper City:
The spires of the top of the pinnacle are the home to People of the Skies: Eagle – “Cesqen”; Falcon – “Toixtex”; Hawk – “Xenxinele” and (Sea)Gull – “Geni.” Tall buildings host churches, convents, hospitals, fine hotels and government buildings surrounding the tallest building, the meeting hall of the Countil of Eight, (the Chiefs of the Eight major Peoples of Teltelkes Heheces.)

The Outer City:
Across the river, spanned by bridges of fine white stone, lies the great semi-circle of the Outer City. Here are the homes of members of the other Peoples and those of other races who make their home on this island nation. Notable buildings include various Guild halls, including those of Magicians, Merchants and Adventurers, lesser government buildings, and walled estates of local rich and stores of all types. Narrow walkways, ladders and an elevator lead from the Outer City to the river below.

Posted by Andrew C. Durston at 3:31 PM No comments: