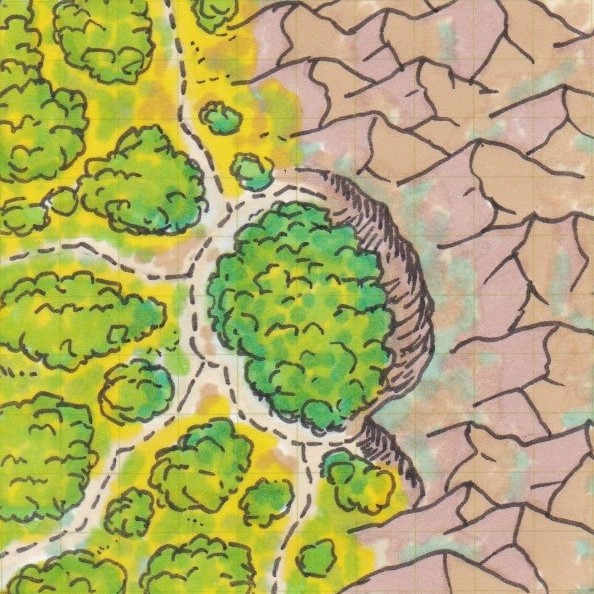 Traveling further north and east from the battleground will lead you deeper into Medvedian territory.  Slightly longer than a day-and-a-half’s journey in that direction lies one of the Medvenian’s larger areas, the Tryphar Caverns and the Voniheln Woods.  The caverns lie to the east and are the home of the males of the Giant Whisper Kin.  The woods are home to the women, children and the infirm. The Kin built their homes in the upper boughs of the trees and with the help of magic they have created wooden paths linking the various homes to each other and to the nearby caves.

Men rarely venture from the caves and indeed most Medvedian tribes are led by women. But the men will fight, individuals will protect their mate when she is pregnant and all will gather to defend the Kin if threatened.  Otherwise, men prefer their solitude and studies. The Tryphar caverns are known for its library which is filled with books, scrolls and the art of the Giant Whisper Kin.

The women of Giant Whisper Kin are slightly more social and their homes are quite beautiful.  Each family, along with their extended relations, live in a tree house. The house is built on sturdy old trees, known as Egoves and through magic a room can be grown at any time.  You can tell how old is a particular family in the tribe by how large they have created their home.

A special group of women in the Giant Whisper Kin, are skilled in nature magic that allows them to talk to the trees and work and shape them.  These homes are usually quite elaborate and feature detailed wooden statues. Even common furniture such as their chairs and tables are wondrously beautiful. 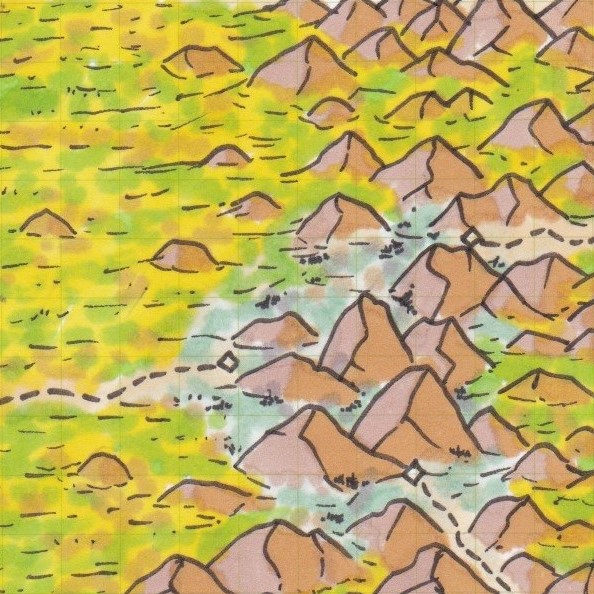 
Two days journey to the north east the traveler will come upon an area of many hills and valleys.  The land is scarred and scorched and odd pits and gouges in the land seem to be all out of place.  The area is home to many caves and cave systems and three races claim the right to own this land.  Currently the land is divided into roughly 3 areas, each corresponding to the direction that the claiming race hailed from. The Dwarves to the south have tried to mine the caves for its precious minerals and gems.  The Tygrys, coming from the south-west, are positive this land belongs to them. Lastly, the Medvedian (bear) people claim the rest as a religious area because some of these caves are said to bring blessing to the cubs that are born within them.  Battles happen several times a year; but no race has held it more than a few months.


The Dwarven part of the land includes a cave system which they have mined in between battles.  The caves contain the rare mineral Kutosolite which is used in many of the elite weapons and armor that they create. The top of the land features the remains of previous fortifications and includes wood, stone, and various metal debris; mostly these represent the remains of left-over siege engines and fortifications.


The south-western third of this block is part of the land that once belonged to the Tygrys.  The Tygrys were the original owners of the land and are willing to fight tooth-and-claw to keep it.  Many Tygrys can trace their ancestors back to this area of land and they refuse to let it go.


Lastly, the Bear tribes’ area is a series of caves that overlook most of the battlefield.  Each year, when the cubs, are due to be born, many pregnant females come to the caves to give birth. It is during this time that the Medvedian tribe’s men are at their most fierce and protective.  Several battles have been started during this time as some poor Dwarf or Tygrys has gotten in the way of an overprotective father Medvedian.

Posted by Andrew C. Durston at 7:44 PM No comments: