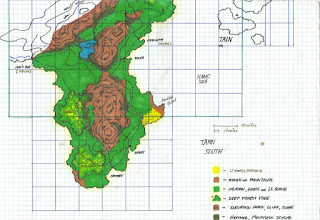 ** Continuing and concluding the history of this Adventuring Company **

At various times in past history, events conspire to bring together unique groups of individuals and forge them into a whole. This is one of those cases.  The forces of darkness have managed to unite, under one ruler, the various scattered tribes of orcs in a local mountainous region.  These orcs, whose energies are usually spent raiding each other, are now marshalled and pose a threat against local civilized areas.  The government has, in turn, offered bounties on captured and slain orcs, in the hope of drawing help from mercenaries and adventurers.

Against this backdrop, Ardelain Darok gathered his hearty band.  A fairly skilled mage, he scouted the local towns for fighters, a scout or thief and a healer.  He first found Drankar, a Sohleugir (Lizardman) with a love for combat.  Next he encountered and charmed, Night's Flight, a dark tribe lady wielding the Black Bow. Paigel the burglar was next, an energetic Idyvian (Feline) always on the move.  The somber and solid Gwen Alsace, a lay healer, completed the group. With a group of five, a name-The Smoke Cats and the promise of bounties from the government, Ardelain set out to seek danger and perhaps a fortune.

The tactics of the Smoke Cats are fairly straight forward. Paigel and Ardelain's cat serve as the scouts and outriders of the group.  Ardelain will use Airwings and summoned animals to supplement their information gathering.  For long-range combat they rely on Night's Flight bow supplemented by Ardelain (by bow or spell), Drankhar and Paigel (when she feels like it).  When things get down and dirty, Drankhar leads the way.  Night's Flight supports his flank with Gwen in the second rank with her pike. Ardelain contributes his spells.

The Smoke Cats/Orchunters can be used as either friends or foes of a group of PCs.  Their direction depends on Ardelain's particular whims and Drankar's reaction to such.

1.  A single PC might join the group to spend some time and gain experience fighting the orcs of the local region.

2.  A friend of the Smoke Cats might hire the PCs to find the group if they are overdue or have bitten off more than they can chew. This may lean to a rescue mission or recovery of remains!

3.  An adventuring group might develop a friendly rivalry with the Smoke Cats concerning hunting for a particular bounty. Orc chieftans and their lieutenants may bring in 50-100 GP a head.

On the world of Arda, the followers of the Spider Cult united the scattered Orc tribes in the Sarandon hills of the Barony of Tarn South. The united Orcs declared an independent state and began to raid out of the hills.  The Idyvian Baron of Tarn South, Geran Shirlan, issued a proclamation of bounties on all orcs, Lesser and Greater. Adventurers and mercenaries were drawn to the region like moths to a lamp.

In the beginning of the year 4378, of current reckoning, the Smoke Cats came to Tarn South.  They had some minor successes over the next few months.  In the 5th month of that year, a Wose archer named Maikkiku Bob (3rd level Barbarian, longbow, maces, no armor) joined their group at Drankar's insistence (he recruited Bob from another group "The Pack"). A month later, Paigel took a young Cossack, named Sasha (1st level Assassin, kynacs, leather armor), as an apprentice.

A month later the Smoke Cats were drawn into an ambush by a superior force of orcs.  Gwen and Night's Flight were slain and Drankar and Ardelain were severely wounded.  The Black Bow was recovered and passed to Sasha (Bob refused being a superstitious sort). The group retreated to a nearby city, Corinth, to recover.

Several months later, with everyone recovered, the group attempted to try again.  They recruited Fala Ka, an Idyvian female (1st lvl Lay Healer, staff).  However, the deaths of their friends weighed heavy on Ardelain and Drankar and their hearts weren't in it.  The group disbanded.  Paigel and Sasha left for the west and Bob went home to the woods. Bob and Sasha later joined Kelly's Heroes, another adventuring company. A month later, a disillusioned Drankar Stang meets Douglas McDurrgan, a high man warrior (5th lvl fighter, axe, shield and platemail) in a tavern in Corinth.  Both had felt that he had lost face in a past battle.  They decided to return to the field and regain face within themselves.

Drankar finds Ardelain and Fala Ka, and with Douglas, recruits Skarim, a male Idyvian mercenary (5th lvl Fighter, falchion, shield and chain mail) and Darnos, a half Light Elf Holy Warrior of Manwe (2nd lvl Paladin, spear, shield and leather breastplate).  The Smoke Cats, rejuvenated, strike out for fame and fortune.  They find such in numerous skirmish; earning bounties and notices from the Barony.  Though Douglas has since left, their adventures continue to this day. 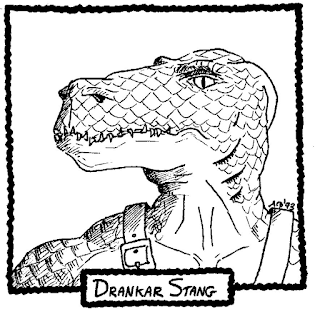 ** Last but not least, Drankar the Lizardman **

Drankar Stang is the rock upon which the Smoke Cats are built.  He is a strong, competent warrior with great potential.  Drankar, like all Sohleugir, possesses a strong warrior ethic, chivalrous as most knights.  He follows the church of Measse, Lady of Battles & Paladins.  His scaled skin being resistant, he wears little but a weapons harness and plain loincloth under breastplate, greaves and vambrances. 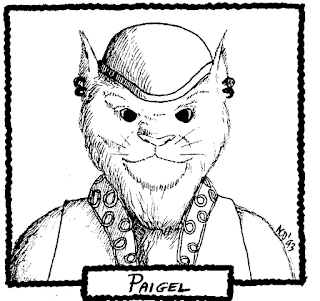 Paigel the burglar is a skilled second-story person.  Though over confident about her craft and skills, she is a good team player and is always bright and happy.  Paigel easily counters Ardelain's dark moods and Drankar's solid silence.  Sometimes though she only seems to be along for the ride.  She usually wears dark clothes; pants, vest and boots, fancies floppy hats and black enameled earrings. 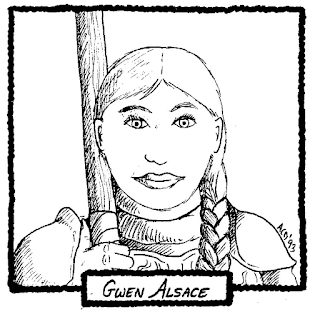 Gwen has traveled to the south to learn healing crafts to be able to help her clan at home.  A youngest child, whose mother died in birth, she was blamed for her mother's death.  Gwen has always strived to make up for that loss.  She tirelessly works to make sure everyone in the group is healthy and alive. She wears an enameled and engraved cuirass over a blousy tunic, grey pants and leather shoes.

SPECIAL ABILITIES: +15 to RE, EM, IN bonuses, Half Cost Armor Dev.

Posted by Andrew C. Durston at 9:58 AM No comments: 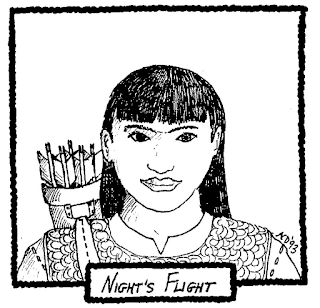 Night's Flight, the common language translation of her tribal name, is the group's archer.  She is quiet and calm, only assertive when the subject of killing orcs comes up.  Night likes to drink and frequents many taverns on the road.  Her long black hair is bound in leather, she wears a chain shirt over tunic and leather chaps. Ardelain worries that the Black Bow conceals her true personality.

Posted by Andrew C. Durston at 8:57 AM No comments: 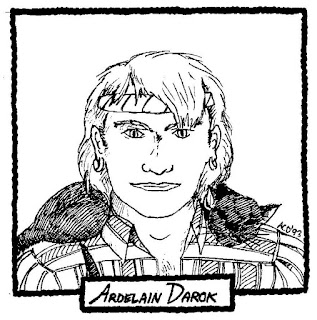 ** A series of Rolemaster NPCs I created almost 20 years ago **

Flashily dressed in bright colored blousy tunic silk sash and baggy pants, with a black cat familiar named Midnight, Ardelain Darok cuts a striking figure.  He is decidedly the inspiration and driving force of his adventuring company, Ardelain means to make a name for himself and his companions.  His nose leads him to the right place and time, but he doesn't always succeed.