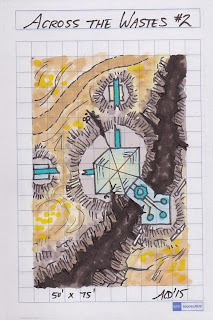 The inexorable passage of time has caused the wastes to swallow many a fallen empire. Those empires varied in size and scope, they wielded high sorceries or manufactured terrible machines, some fell to disease, some to war and others to disaster.

The fallen empire of this region powered their economy by tapping into the ley lines that ran below the great prairies (as they were at the time). Buildings dotted the landscape, attached to great pipes driven into the lines like wells tapping an aquifer. The magic was pulled to the surface and passed into sapphire tubes that crisscrossed their territory. Magic was plentiful and consumed by all.

As all these stories end, one day the wells ran dry. Perhaps the ley lines ran out of magic or perhaps the world felt the drain, like a deep wound on its surface, and redirected the ley lines elsewhere. The empire soon fell and was consumed by the wastes, leaving behind these empty wells, perched on dark crevasses, connected to broken tubes.
Posted by Andrew C. Durston at 9:39 PM No comments: 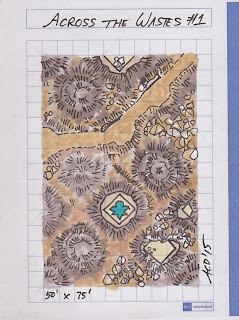 In the depths of the wastes lies an array of regularly spaced structures. Once perhaps cylindrical or conical, time and weather have worn the stone to irregular domes about 20 foot in diameter and perhaps 30 feet high.

These structures predate all who have in or crossed the wastes. Their lore suggests something lies within these demos, but none have seen one hatch or open. In years past, sandstorms covered the field of domes. When the weather cleared, sometimes a dome had vanished, replaced by a pile of rubble.

Other domes have collapsed, revealing featureless square chambers within. These are sometimes used as nests or lairs of the beasts of the wastes or even homes to the strange hermits who have anointed themselves guardians of "the array" as they call it.
Posted by Andrew C. Durston at 10:48 PM No comments: 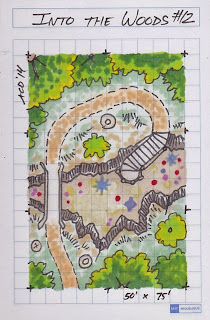 Ley lines run hither and yon through the depths of the woods. Years ago an earth magician parted the ground into order to tap one line with quite unexpected results. A rift formed, a pathway between worlds, dancing lights of stars visible beyond. The unfortunate mage fell into the rift and was never seen again. Inhabitants bridged the ravine and built a staircase descending to a vantage point to study the stellar display below.
Posted by Andrew C. Durston at 10:36 PM No comments: