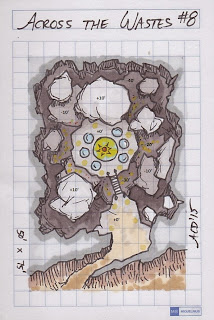 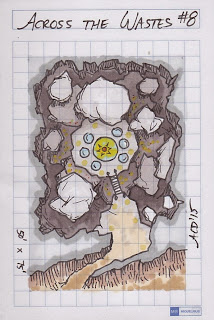 For the #micromapoftheweek theme #cult

Years ago a dirt devil (a sort of minor magician dealing in earth magicks) followed a ley line across the Southern Wastes. He stumbled into a spherical cavern where a loop in the magicks formed a whirling mass of stone and rock. She managed to convince other stone singers to come to the site and behold what she had found.

Years later, the #cult of Shattered Stone maintains its headquarters in this hidden cavern. Working together, the earth enchanters managed to tap the ley line, slow and stabilize the swirling masses and formed an organized structure. It is an #Orrery of a sort, with an altar at its center. The magicians meet to wield the magicks of the ley line in various rituals, usually of construction and destruction.
Posted by Andrew C. Durston at 1:00 PM