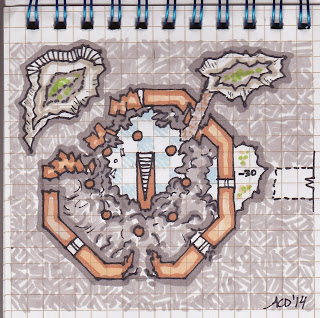 The Hidden Tower pt. 4 ( #micromapmonday #spirosblaak https://plus.google.com/u/0/communities/100219562385457429873 ) In Holsfrin's Digs - several hundred feet from a barrier, past several short side tunnels,  the miner-made tunnel intersects with a natural hollow in the volcanic rock. The far wall of the chamber is the white and red stone of a tower swallowed by the mud, rock and lava of a  great eruption. A narrow window marks the center of the wall. The miners widened the opening with picks so that they could climb into the building and explore.

Tower Level Up 3 - The top of the tower, the cascade of lava and mud that buried the structure has almost collapsed the roof. What remains is a hollow about twenty feet across featuring the stairs and little else. Some of the pillars, that support the vaulted ceiling above, can still be glimpsed. The floor is covered with debris, mostly fragments of stone from the roof and lava from the volcano. Marks suggest the Wizard's Kav attempted to dig their way out before finding the rift leading out of the level below.

That rift (upper left of the map) continues upward toward the surface beyond the tower. From here Kav returned to the mainland to pursue those who stole from the wizard's tomb in the Chamber of Jade below.

The sounds of digging attracted the attention of a tunneling creature that has slowly dug its way into of the uppermost chamber (from another rift to the upper right side). Like a hunter camouflaging a trap, the monster regularly refills the tunnel with debris to conceal its presence (DC20 Perception or Rock Lore to see the difference in texture of the stone) as it comes and goes hunting in the mines below and beyond.