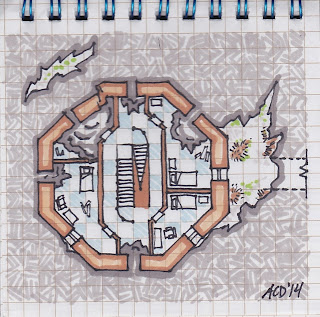 The Hidden Tower pt. 2 ( #micromapmonday #spirosblaak https://plus.google.com/u/0/communities/100219562385457429873)
In Holsfrin's Digs - several hundred feet from a barrier, past several short side tunnels,  the miner-made tunnel intersects with a natural hollow in the volcanic rock. The far wall of the chamber is the white and red stone of a tower swallowed by the mud, rock and lava of a  great eruption. A narrow window marks the center of the wall. The miners widened the opening with picks so that they could climb into the building and explore.
Tower Level Up 1 - The first level up is divided into four chambers that appear to be the one-time living quarters of the Wizard's bodyguards and servants. Irregular in shape and size, each has one or two windows and the remains of traditional furniture such as beds, chairs and nightstands. Several are filled with dark frozen stone that poured in through shattered windows or cracked walls. The contents have been overturned and picked through by the miners who found the tower.