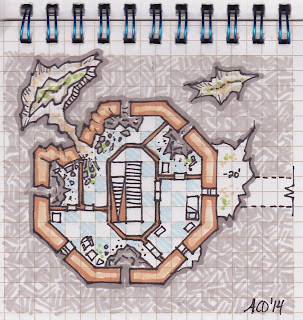 The Hidden Tower pt. 3 ( #micromapmonday #spirosblaak https://plus.google.com/u/0/communities/100219562385457429873)
In Holsfrin's Digs - several hundred feet from a barrier, past several short side tunnels,  the miner-made tunnel intersects with a natural hollow in the volcanic rock. The far wall of the chamber is the white and red stone of a tower swallowed by the mud, rock and lava of a  great eruption. A narrow window marks the center of the wall. The miners widened the opening with picks so that they could climb into the building and explore.

Tower Level Up 2 - The second level up features two large chambers. The smaller (on the right) was that of the Wizard's Kavbroed Lieutenant. The larger (on the left) was the bedchamber of the Wizard himself. In their search for an exit from the tower, once the miners blocked their tunnel, the awakened Kavraen found a rift in the lava reached by a large gap in the outer walls within the Wizard's suite of rooms. Piles of broken rock and dirt reveal their efforts to widen the opening. Sharp eyes also spot bits of jade scraped off of the Wizard's "sarcophagus."