Returning to my #Southlands sandbox, The North Watch, with a #micromap considering the Old North Watch, a tower referenced in Chapter Two.

About a day and half west of North Watch is a ruined tower known as Old North Watch. Built in the early years of the Lion Road, Old North Watch fell victim to a prodigious run of bad luck including raids, disease, avalanche and finally a landslide which carried away most of the surrounding village. Old North Watch was abandoned and soon after North Watch was established. The wilderness now works to reclaim the ruins. Birds nest in the single tower that remains, creatures have dug lairs in the cellars." 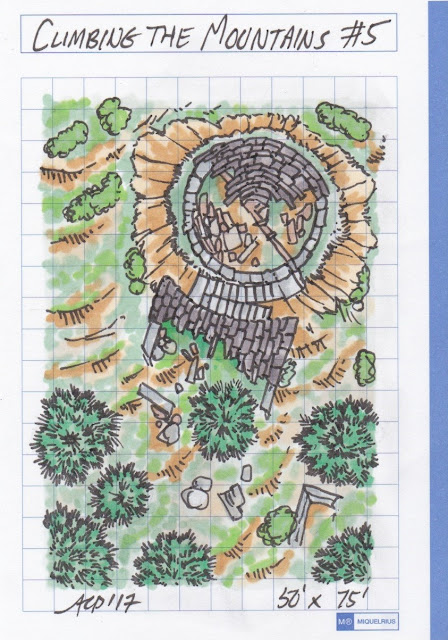 The remains of Old North Watch consist of the main tower, approximately 25 feet in diameter and 3 stories tall (about 40 feet to the highest point of remaining roof), and the back wall and a portion of the roof of the Great Hall. A flight of stairs connects the two. Trees stand guard over the sloping hillside which is dotted with stones, partial walls and debris poking through the heather and scrub. The main tower, under the roof, is dry enough that, unless occupied, it might serve as refuge from the elements.