The fine folk over a Kobold Press are holding a contest - Lethal Lairs - to develop a 1500 word site/battle map for the #Southlands . Life being what it is these days, I didn't have time to complete my entry, but I did get far enough that I figure I'd post what I had. Likely I will also fold it into my current North Watch project.

So without further ado, a somewhat Lethal Lair. :)


Introduction
In the south and west of Nuria Natal, far from the rivers, the land turns to an expanse of barren waste. Bandits and raiders, who prey upon merchants on the roads and waterways, flee into the wastes to elude pursuit. Beyond the dry plains, the MBazha mountains fill the horizon. At the edge of those mountains, where water appears again, the robbers have built their homes into the rock. The largest settlement, home to the most dangerous band Rabban's Raiders, is a box canyon of stone soaked red by the blood of Titans spilled during a great battle in the ancient past. 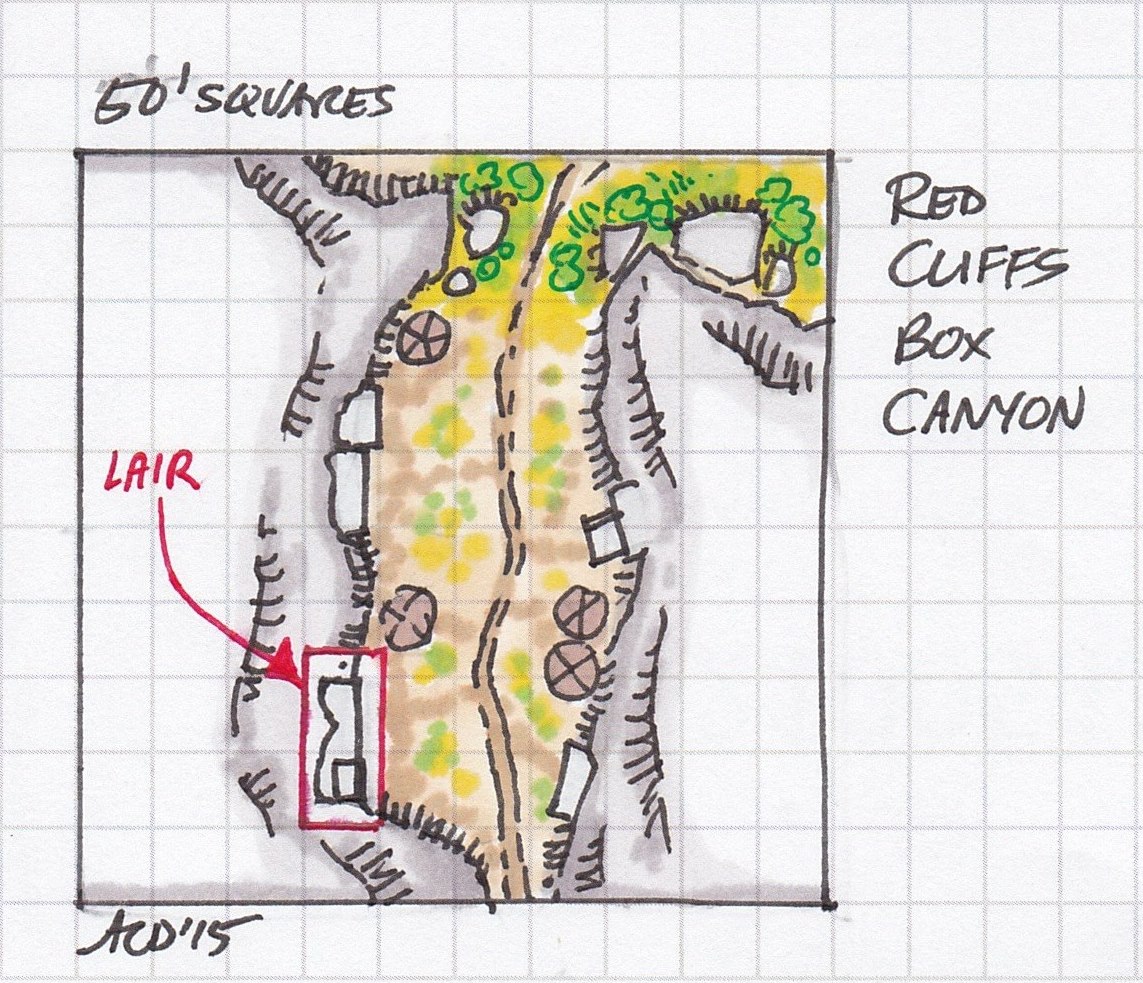 Rabban's Raiders hide in a narrow box canyon about 150 feet at its widest and well over 500 feet deep, The north end opens on to the Nurian wastes. Most of the natural foliage and cover has been retained or restored to hide the canyon from direct view. Only a narrow entry path can be seen on close or overhead inspection.


The south end narrows to a steep path along a ravine ascending into the foothills of the mountains. It can be used for escape in times of danger, but the path is single-file and the climb tricky. The ravine becomes a dry wash that divides the canyon floor in half. The floor is filled with a variable number of tents (based on the strength of the Raiders at any one time). A large corral covers part of the west side. A number of rooms and chamber have been carved into or built out of the canyon walls. In the southwest corner is a three story group of chambers, known as Rabban’s Retreat, that is home to Rabban and his favored lieutenants. Guards patrol the space outside and the floors inside at all times. 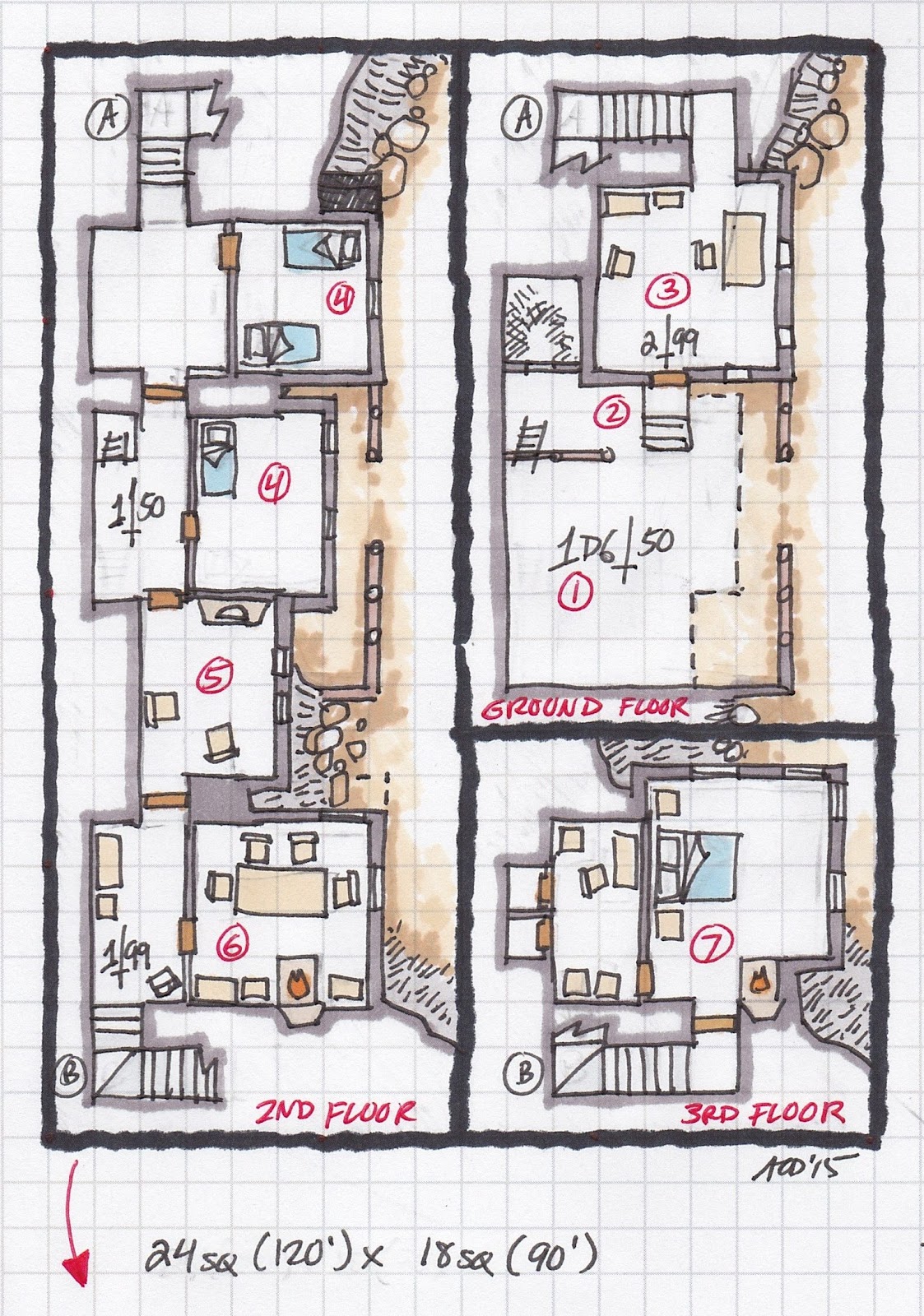 Ground Floor
The canyon level floor of the Retreat features a small stables (1) for the steeds for Rabban and his lieutenants. Next to that is the entryway and hayloft (2), the latter connected by ladder to the 2nd floor. Beyond a doorway is the "mud" room where guests are greeted and some supplies are stored. Stairs (A) lead from the back of the mudroom up to the second floor.


2nd Floor
The stairs (A) from the ground floor lead to a hallway divided by several doors. Along the outside wall are two bedroom (4) for Rabban's favored lieutenants. Next is a lounge (5) that also features a small shrine maintained by Ibn-Mal the priest. At the end of the hall is a meeting room/kitchen (6) featuring a firepit, storage, a large table and chairs, Stairs (B) lead from the hallway outside (6) up to the third floor.


3rd Floor
The stairs (B) from the 2nd floor lead to Rabban's quarters (7) that occupy the entire third floor. He has a large bedroom with a fine view of the canyon. Through a locked door is his office within which are two vaults built into the stone walls.


Ibn-Mal or Ibn the Dervish, Hero level cleric
Short thin overly energetic Natali woman. Worshipper of the desert winds (or equivalent). Wears many scarves and ribbons. Favors whirling weapons like ships or chains (or kusari gama equivalent). Accomplished healed and provides mass blessings for the bandits (curses for their opponents). Skilled with herbs and cooking.


The Faceless One, Hero level magician
Tall person of unknown race clad head to toe in brown and gray robes. Voice altered by magics. Wears a dull metal mask. Wields a simple staff of black wood and mithril heels. Has a small desert wyvern (or mini-drake) as a familiar. Summons the desert winds to shield large groups of bandits.


Shanta M’Bembu, Hero level thief
Tall thin Narumbeki woman, perhaps ritually branded indicating her profession. Skill and savy hunter and thief. Good with bow, spear and long knives. Practiced outdoors and indoors. Very streetwise and knows many of the nobles (likely establishes bribes to select which caravans will not be subject to raids).

The distribution of races of Rabban’s Raiders resemble that of the nearby nations, Narumbeki and Nuria Natal.  However given the small total population, the proportions don’t follow the same percentages you might expect.


Note: In order to allow for flexibility and scaling for the power-level of a campaign, NPC levels are given in generic categories, specifically (from lowest level to highest):
Posted by Andrew C. Durston at 9:48 PM