As the years passed after the Lion Road was established, caravan masters and local merchants worked together to maintain and optimize the highway. In the long valley north of South Watch, they surveyed a change in route that required a bridge over a mountain stream flowing east into Cold Lake. 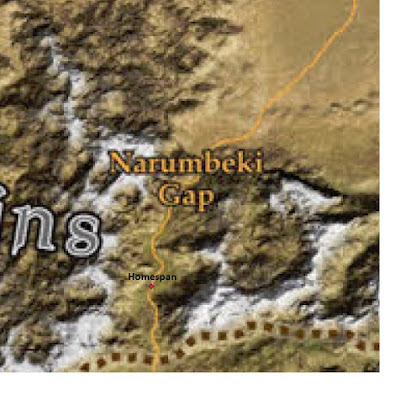 Dwarf engineers, from Sebbek Sobor, were hired to survey the site accompanied by several Shields of Narumbeki warriors from South Watch. Unfortunately the best site for the span also happened to be the home to a rather large and dangerous mountain troll. The warriors prepared to engage the monster in combat, but the dwarves had a better idea.

They sent their largest and most fearless engineer, with a mule laden with casks, to carefully approach where the troll appeared to reside further upstream. With some rather careful but loud negotiation, they reached an agreement.

Over the next several years, the dwarves built the span across the river with an unusual feature. in the center of the north end of the bridge, 70 or so feet below the top of the bridge along the riverbed, was a large 6 foot wide, 15 foot tall door. It opened into hall leading to a simple, but large 20 foot square, 25 foot tall chamber carved into the mountain which the troll could call home.

In the years since its construction, that troll has made the site his (or her?) home, expanding the chamber into the heart of the mountain. Its presence has had an added benefit of driving away other less tractable intruders. The locals have nicknamed the bridge the Homespan.﻿
Posted by Andrew C. Durston at 6:11 PM