The North Watch: Chapter Three Preview - The Value of Ruins

Vale of Ruins
South of the village of Dead End, along the old Lion Road on the other side of a mountain pass, is a valley about 60 miles long and 20 to 30 miles at its widest. It is known to the locals as the Vale of Ruins. The old Lion Road skirts the western side of the valley as the eastern portion is dominated by a large plateau rising several hundred feet above the valley floor. 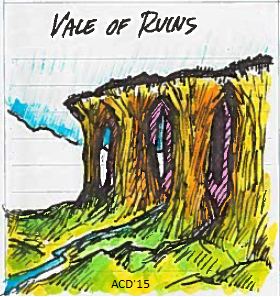 Although ancient, the plateau is not natural but is in fact a section of the valley floor raised hundreds of feet into the air by the ancient Titans. The magicks pulled the land from the bedrock, supported on miles-wide pillars of stone. The ritual left tall narrow gaps and openings in the plateau leading into hollows underneath. Some lead to numerous underground chambers, from others underground streams, fed by the mountains to the east, flow to the floor of the valley.  A vast array of ruins, known as the Arena of the Titans, covers the top of the mesa.
Posted by Andrew C. Durston at 11:47 AM