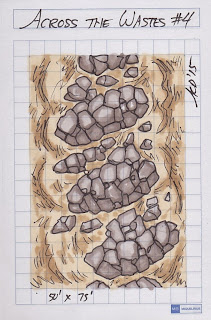 Beyond the Abyssal Sea, the dunes swirl about gnarled and worn stone outcroppings clustered in groups of 4 to 10. Appearing ordinary at a distance, the local caravans give the area a wide berth. Why you ask? For in those clusters are the "rocks that sleep" - fierce nigh invulnerable omnivores whose stone fangs can rend anything but each other.

Fortunately they are rarely awake, but unfortunately when they do stir,  they tend to wake in groups (families? clans?) Menhirrim some call the groups, for some of the hidden horrors have been known to rise  on massive hind-legs before striking.
Posted by Andrew C. Durston at 10:28 PM