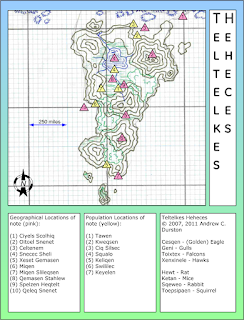 The introduction to the land of Teltelkes Heheces included a map of the island nation. Below the map was a short list of geographical points of interest and a 2nd list of population centers of interest. Those two lists are further detailed in this entry.

Geographical Locations of note:
1.    Cixels Scolhiq – the "frozen channel" is an ice-choked strait along the north coast of the island, between it and the arctic ice packs. It is only completely clear of ice during the warmest summers.
2.    Oitoel Snenet – the "highest peak" is a beautiful sight, rising to the skies, north face painted with snow and glistening ice. The tallest mountain anchors the north-east corner of the island and rises to an elevation of over 12000 feet. Probably an extinct or long dormant volcano, Oitoel Snenet is an impressive sight. Its flanks are covered with swaths of forest giving way to fields of snow and ice. Rumor places a notable site or tomb called Rocaim's Watch on its eastern flanks.
3.    Celtenem - Around an outcropping of land at the north-east corner of Teltelkes Heheces is "Boundary Bay" and in the bay's southwest corner, against the slopes of Oitoel Snenet, the fishing town of Kweqsen (P.2). Celtenem is usually ice-free except during the harshest winters when it has been known to freeze solid. When it does, it is said the resulting silence is most impressive.
4.    Snecec Sheli - the "Lake of Life" sits in the north center of Teltelkes Heheces. It is a large body, almost an inland sea, which covers much of the northern half of the island.
·    "As Phoenat leads you along the lake's eastern coast, you see
that its waters are also dotted with vessels (the lake is almost 135 miles across at its widest) and small islands."
5.    Xeset Gemasen – is a narrow valley between the mountains of the east coast of Teltelkes Heheces. It forms a passageway between the vast forest to the west and the coastal plains to the east.
6.    Miqen – is the tallest mountain in the southern portion of the island with an elevation of over 8000 feet. From Miqen one can see hundreds of miles across the seas to the south.
7.    Miqen Slileqsen – is the southernmost point of Teltelkes Heheces. South of the island is a long chain of numerous smaller islands and many many outcroppings and rocks, making for difficult sailing for all but experienced local sailors.
8.    Qemasen Stahlew - the "Ravine River," runs north from the hills around the capital of Tawen (P.1) across the plains and empties into Snecec Sheli.
9.    Spelzen Heqtelt - "Field of Tall or Giants" is the region of limestone outcroppings just north of Tawen along the Qemasen Stahlew.
·    "The weather of the world has gnawed away at the rock and left a field of pinnacles, like pieces upon a chessboard, arrayed along the north slopes."
10.    Qeleq Snenet - "tangled rock" is a seaweed covered outcrop in the sea west of Swililec (P.6). It is considered a sailing hazard.

Population Locations of note:
1.    Tawen – capital of Teltelkes Heheces. A great pinnacle rises from the ground, the river carves a path along its eastern side. Comprised of three parts, the Lower City nestles in a huge opening in the stone along the river bank. The Outer City sprawls around two bridges crossing the canyon from the pinnacle to the eastern bank. And above, in the air, the Upper City is perched in the top of the limestone.
·    Tosca the Mouse relates, "South of here mountains rise across the southern part of the island. The source of the Qemasen is high upon their slopes. Ridges of rock extend northward from the chain. Limestone it is called. The weather of the world has gnawed away at the rock and left a field of pinnacles, like pieces upon a chessboard, arrayed along the north slopes. The Qemasen, as it grows into a large river, cuts through the
slopes and winds about the vast rocks."
·    "Tawen, our city, is built into one of these spires, where the river
has carved an opening in the plains. The side of the stone was
revealed and ages ago a collapse created a hollow in the stone. There the first of my Peoples built the Lower City of Tawen. Up in the air, atop the pinnacle, there is a hollow. In that opening, Phoenat's People built the Upper City. Tunnels have been carved through the stone, shored by magic and man, to connect the two."
·    "As Tawen grew, other Peoples and visitors settled in the area. Soon the pinnacle began to become crowded. And so the Outer City was begun across the Qemasen and two great bridges built to connect it to the spire. Tawen thus continues to grow up, down and outward as you will soon see."
2.    Kweqsen - "Boat Nook" appears much like any fishing village of other nations.
·    "Fishing boats drift in and out of the harbor, most, at end of day, lined up against docks or shore. But as you near, the differences in the people become more apparent. A cluster of seagulls circles about a couple on the beach. Several drop from the sky and with a flash become people joining their fellows on the sands. Further away a bear hauls itself out of the surf, a fish in its mouth, drops the catch, swirls into a man who grabs the fish and a nearby cloak hung on a staff. Swirling the cloak about his hirsute form, he heads towards a house fish and staff in hand."
3.    Ciq Silsec - "Snowy Woods" a small settlement in woods along the north coast. It is home to a small tribe of the Nitem Xheqtnec , People of the White Tiger,
·    "After about two hours of scenic but uneventful travel an area of forest comes into view covering the land from cliff-side to several miles inland. Heqtelt turns slightly inland and leads the group to an opening in the canopy only noticeable to Phoenat and the Falcon at this distance. Dropping through the trees, you land on the verdant forest floor. A short distance away you can see another clearing featuring a bowl-shaped depression with a fire-pit in the center. About the outer edges, between the trees, you see one or two doorways leading into dens carved into the earth."
4.    Squalo - A town, Squalo, is nestled against the main bank of the Qemasen where it empties into the Snecec Sheli (L.4). Squalo is a popular stopping point for those making the journey from Tawen to points in the northern half of the island.
5.    Keliqen – A large port, Keliqen is the southernmost population center of Teltelkes Hehecs. It is the gateway to the rest of the world, hosting traders and sailors from nations to the west, south and east. Distant from Tawen, Keliqen's ruling elders have sometimes strayed from following the Council of Eight in Tawen.
6.    Swililec - a couple hundred miles south-west of Tawen, is a fishing port. Growing about a small cove featuring a natural breakwater of fallen cliffside, is the largest of Teltelkes Heheces' western ports. Ships may launch from there for the crossing to the many nations of western continents. The middle of fall signals a gradual decline in such shipping as the storms of winter spawn from the icepacks of the arctic.


Next article: The nature of the People