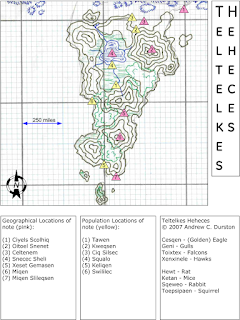 Presenting the first in a series of writings presenting a setting for your campaign.

Teltelkes Heheces is a large island in a northern ocean near the ice packs of a pole of the world. A thousand miles long and over five hundred at its widest, Teltelkes Heheces is the home to a race of humanoids who call themselves the Peoples. Others call them Shape-shifters or Shape-sharers or Animal-kind or many other titles, names or slurs. The Peoples are unique for their spirit or soul bridges two forms, a humanoid body and an animal body. Only one is present at any one time, the other magically hidden "elsewere." The Peoples normally switch forms by force of will but may change in times of stress or when injured.

Across the half-million square miles, Teltelkes Heheces features a half-dozen notable settlements (some of which shall be presented in later installments). Soaring peaks, deep valleys, verdant forests, narrow rivers, mountain-born streams and a large inland lake can be found within the coasts of the island. The bulk of the population comes from eight tribes of the Peoples, with the rest being other races that found their way to Teltelkes Heheces over the years.