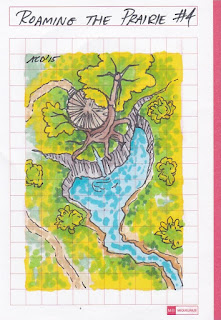 As we're home for the (US) Holiday weekend, I did a #micromapoftheweek theme of #home

In the #Southlands north of the MBazha mountains and east of the Lion Road, a druid has grown a home in the foothills were the peaks descend toward the plains and wastes that lead north to Nuria Natal.

Simply known as the Weatherman, the druid's home nestles against a large tree that grows about the circular structure. The tree sits on a earthen outcropping. A spring flows from between its roots into a small pool leading to a creek flowing further downhill.

The life-giving water supports both local wildlife and a small number of settlements nestled between the lower elevations of the MBazha range. No government holds sway here, disputes are settled by traditional means. If those fail, the Weatherman fairly and dispassionately adjudicates.

The druid vigorously protects the area, usually by using wind, snow and rain to confuse, drench or bury unwanted intruders. The locals note the druid is especially harsh to any thing or persons coming from the southeast (the direction of Kush).
Posted by Andrew C. Durston at 8:23 PM