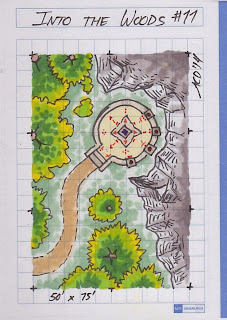 For yesterday's #micromapmonday with the theme of #holiday :

At the edge of the great ravine, the Sunwatchers built a temple so that they could watch the rise of the sun. On the walls of the circle, they placed stone obelisks fashioned with vertical slots, arranged so that the rising sun, at the beginning of each season, shone through the gaps. The sunlight would be focused by lenses set into the slots onto the central altar. The resultant heat would ignite the festival fires.

Runners, selected by their villages by competition or election for this was a high honor, would light torches from the holy fire and run tirelessly through the woods to central squares and grand keeps alike, to ignite their bonfires and fireplaces. So, the priests declared, began the four seasons of the land.
Posted by Andrew C. Durston at 9:17 PM