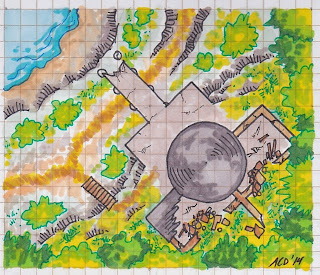 The Last Source
( #micromapmonday #strangebrew https://plus.google.com/u/0/communities/100219562385457429873 )
In a world where the magic of man, demon, undead and elemental has polluted the natural essence of the land, nature has called its followers to gather at one of the last sources of pure earth magic. The witches and warlocks, of the Pure Waters coven, have accepted the charge to keep the pool and surrounding landscape clean and verdant, weaving spells and wards to conceal and hide the site from prying eyes and wandering foes.

Part 3 - The Ancient Tower - South of the Halls of Crafting (http://campaign-nook.blogspot.com/2014/06/micro-map-monday-6-16-2014.html ) along the curve of the path, an ancient tower rises above the coven. The path dips under old stone docks, used when the pool was much larger. The witches and warlocks were not the first to live here, the five story stone structure is the remains of a long lost nobles' manor house. The top levels are now used for scrying, both visual and magical, by means of devices and the waters of the Last Source. Below ground, the dungeons of the manor are used to imprison intruders and enemies of the coven.