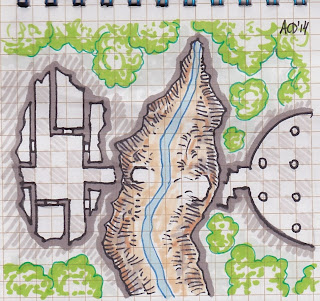 Freedom ( #micromapmonday #spirosblaak  https://plus.google.com/u/0/communities/100219562385457429873) -
Many prisoners have tried to escape the cells and chain gangs of Kraephos. Few have succeeded and most of those have fallen prey to the animals and monsters of the island. Over the years, a number have managed to find a narrow ravine leading to some ancient ruins buried during the great eruption. A small stream carved the ravine down through the stone of the island, unearthing the entombed village.

Three decades or so, one prisoner, only known as the "Old Man" or the "Old Man of the Island," found the ravine and settled there. In years since, if an escapee makes it that far, the Old Man appears to guide he or she to this encampment, marked by the word Freedom painted on one exposed wall.
Posted by Andrew C. Durston at 11:07 PM